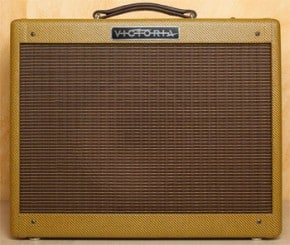 Victoria Amplifiers are produced in Naperville, IL and, though the company features an expanded product line these days, are still best known for the loving and accurate 50’s tweed Fender recreations that put them on the map in the first place. Victoria is excited to announce a new addition to its tweed line, the brand new Ivy League model.

The Ivy League is a reproduction of the now-classic Fender 5F10 Harvard amplifier, which has not been available as a new amp in 50 years. Every part of the Harvard design is recreated in the Ivy League: triple inputs, a 6AT6 7-pin preamp tube, two 6V6 power tubes, and a single 10-inch speaker. All this conspires to make the Ivy League a perfect choice for a recording amplifier. It puts out 14 watts of power that can be warm and cozy when run clean and responsive and explosive when pushed into distortion.

Like every Victoria amp, the Ivy League is hand-made in the USA out of premium components, including transformers, capacitors, resistors, wire, and hardware. Victoria amps have a reputation for quality, tone, and durability, and this new model looks to be more than able to carry on in this tradition. Those who know tweed know Victoria and are probably already on their way to their nearest dealer to suss one of these out. If you have never played a Victoria, now may be the time to give one a test drive. If you feel the need for tweed, there are few better choices than one of Naperville’s finest. Check out www.victoriaamp.com for all the juicy details.