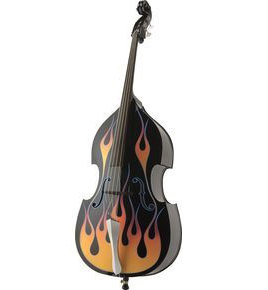 Even though fretted electric bass guitars have been around for almost 60 years, a lot of bassists are still compelled by the classic sounds of the acoustic upright bass. Traditional jazz and be-bop bass players will hardly play anything other than an acoustic upright and rock-a-billy lovers swear by the percussive slap and deep boom that the instrument provides. However, the upright bass isn’t just for nostalgia-minded musicians—it’s a key element of Reprazent’s funky drum ‘n’ bass and Soul Coughing’s hip-hop influenced slacker jazz. The instrument is often found in the hands of players like Pearl Jam’s Jeff Ament, Primus’ Les Claypool, and Sublime’s Eric Wilson

So, while bassists may be in love with the upright’s unique sound, they are not thrilled about its enormous size and the inconveniences involved with amplifying the instrument. One of the bulkiest instruments around, the upright isn’t exactly “portable”, and anyone who’s attempted to take one on an airplane or struggled to fit one into a small car can testify. And due to its deep, resonant body, it is highly vulnerable to feedback when amplified. Add in the bulkiness of the amplifying system needed to reproduce the upright’s subtleties, and then it’ll come apparent to you why so many upright bass players take out their aggression by slapping the instrument around like a drug pusher in a 1970s-era movie.

There are also the physical consequences of playing an upright bass unit. Musicians that are familiar with the fretted electric solidbody bass quickly discover that playing an upright is like learning to walk all over again. The typical electric bass is a guitar, while the acoustic upright bass is directly within the violin family, so, of course, a different set of rules applies. The instrument’s large vertical orientation and unmarked, fretless neck are only part of the challenge. There is also an issue with the body’s massive size, which can be a significant hindrance for many shorter musicians, and, as mentioned earlier, the issue of limited mobility. This greatly impedes freedom of movement on stage, although players like the Reverend Horton Heat’s Jimbo and Stray Cats’ Lee Rocker seem to have overcome this limitation by climbing and humping their instruments.

Due to all of these fore mentioned vast differences, the acoustic upright and electric solidbody bass have existed in virtually separate worlds. But within the last decade, some innovative instrument builders have made impressive progress in developing a bass that combines the most attractive features to create a hybrid of both instruments. In another article, we will talk about these developed instruments from Ovation, Rob Allen, and Citron that shows that you no longer need to haul around an axe the size of a Chicago bachelor apartment.

The Sterling line by Music Man is designed to deliver classic Music Man vibe and performance at recession-friendly prices. The new Sterling SB14 electric bass is an excellent example of this idea and is a […]

The answer to “Why design pedals specifically for bass?” is a little more nuanced than some might think. Guitar effects often include a “free” low-cut filter that starts rolling off around 90Hz, on the assumption […]