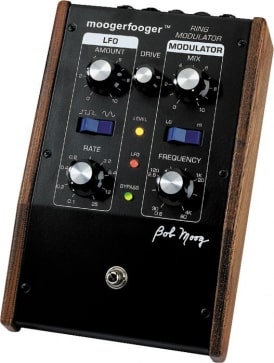 Big Briar Moogerfooger analog effects modules long before he was designing alien stomp boxes for Big Briar, Bob Moog was forever changing the way we make music with a little invention called the synthesizer. With his Moogfooger modules, ol’ Bob has extracted some of the more guitar-friendly features from his creations and packaged them in sturdy oak-and-metal enclosures suitable for stomping desktop tweaking.

Most guitarists will peg the Moogerfooger Lowepass Filter as an “auto wah,” but plug in an expression pedal and it can morph into a conventional wah. Equally versatile is the 12-stage Phaser, which does ever flavor of phasing imaginable and goes a few steps beyond with a sweep frequency that ranges from a barely perceptible one cycle per 100 seconds to a brain-spinning 250 cycles per second.

We spent a day with a Moogerfooger Ring Modulator and still didn’t exhaust its stock sounds. Capable of woofer-blowing lows and crystal-shattering highs, the Ring Modulator adds a clangorous atonality that’s truly out of this world. With is extended frequency range, the ring modulator also functions as a versatile tremolo circuit capable of all kinds of shimmery volume warps. Moogfooging incredible.

Parker Guitars is proud to announce today the addition of the (USA made) Parker Fly Mojo Single Cut to their magnificent line of electric guitars. […]

Paul Reed Smith, long known for his elegant and exciting electric guitar designs, has gone into the amplifier business in a big way recently, releasing a number of high-end tube-powered guitar amps that are as […]

I’m going to let you in on a little high-level industry info: Fender is hyper-picky (but in a good way). In fact, Fender is so militantly nitpicky and protective about the sound of their guitars and amps that no software modeler has ever been allowed to use the Fender name outright […]