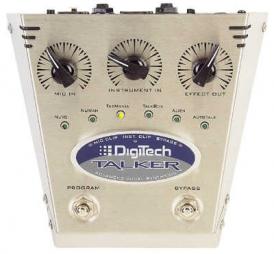 Guitarists have an insatiable desire to make our instruments sound like they’re talking, maybe because so many of us are such lousy singers. Over the years, this has led to the development of some rather unusual effects, like Kustom Electronics’ The Bag, a strange bagpipe-like device shaped like a wine bota and covered in psychedelic material that would even make Austin Powers blush, and the Heil Talk Box, which requires users to gag themselves with a plastic tube to make their guitar sound like someone vomiting through a Big Muff.

One of the most sophisticated and effective “talking instrument” effects is the vocoder, but most of these devise are either geared exclusively towards keyboardists or are complicated rack-mounted units that are difficult to use in live performance. But DigiTech’s Talker pedal is an easy-to-use product geared towards guitarists, providing outstanding vocoder and talk box sounds as well as some unique effects of its own.

The unit is surprisingly simple, with instrument (1/4-inch) and microphone (XLR) outputs, a push-button +4/-10dB input pad, a three-position switch for routing the effected signal to an amp, P.A. or both, a P.A. level control. Other features include a bypass footswitch (which is hardwired to provide true bypass), indicators for mic and instrument clipping and bypass and a footswitch that allows you scroll through the Talker’s six preset effects.

To use the Talker, you simply plug a microphone and instrument into the inputs, set the effects routing switch depending on your setup and adjust the input and output levels. The six presets make the Talker extremely easy to use. Instead of forcing you to mess around with a bunch of complicated controls, the presets are already tweaked for optimum performance. The NuVo (a robot-like vocoder sound, Talk Box (which simulates classic talk box tones) and Alien (a pitch-shifted vocoder) effects can only be heard when you are speaking or singing into the microphone and playing the guitar at the same time. NuWah (an auto wah effect ) works with the guitar alone; TazMania (a wild, distorted vocal effect) works with either mic alone or with both the mic and instrument; and AutoTalk preset senses when no signal is coming through the mic to automatically switch from vocoder effect to a straight guitar tone.

The Talker offers immense creative possibilities. It’s pefect for giving guitar solos some extra personality and expressiveness, and it can greatly beef up the sound of your band’s backup vocals. Unlike other talk boxes and vocoders on the market, the Talker is easy to incorporate into any setup, and it even sounds great when plugged directly into a guitar amp.

The Talker is one of the most unique effects pedals to come and go in a long time. It’s surprisingly useful for on stage and recording applications, and it provides endless hours of creative and experimental fun. If you’ve ever wanted to make your guitar talk, the Talker is the next best thing to transplanting vocal cords into your axe.

In 1970, Gary Kramer co-founded Kramer Guitars with his friend Dennis Berardi. Originally, Kramer started out making Aluminum neck guitars. By 1981 he abandoned the idea to follow Charvel’s trend with wooden neck guitars, which […]

Tube power explosion! Vox ToneLab ST offers thirty-three different amp models with a versatile array of cabinets and effects to take your guitar playing to the next level – wherever you go. Introducing the Valvetronix […]