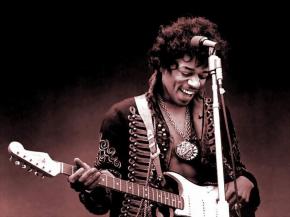 The Greatest Guitar Hero, Jimi Hendrix still remains one of the most influential forces in rock music. Pulling unprecedented sounds out of his Fender Strat, Hendrix challenged musicians and guitarists to explore a wild new world of tones and textures, dazzling and confounding guitar greats like Jeff Beck, Pete Townshend and Eric Clapton, who still speak of Hendrix with a hushed reverence. Other players before him might have experimented with feedback and excessive distortion, Hendrix turned those practices into an art fashion. He was the first player to use the whammy bar as an instrument unto itself, making his Stratocaster talk, scream and howl.

Hendrix’s style was based in the blues, but he borrowed from a wealth of sources, including soul, pop, jazz and classical. “I’d like to get something together, like the Handel and Bach and Muddy Waters, a flamenco type of thing,” Hendrix once remarked. “If I could get that sound, I’d be happy.” He challenged conventional notions of pop music with his psychedelic, mutli-tracked guitar orchestras, inspiring bands like the Beatles and the Rolling Stones to compose some of their finest work.

While the exact circumstances surrounding Hendrix’s death in London, on September 18, 1970, remain somewhat murky, some tragic facts are clear. Hendrix was declared dead on arrival at St. Mary Abbott’s Hospital, close to midnight. According to the pathologist on the case, death came as the result of inhalation of vomit due to barbiturate intoxication. Perhaps the most poignant aspect of the tragedy is that at some point during his day alive, Hendrix, phoning from the flat of his girlfriend, Monika Dannemann, left this message on the answering machine or his manager, Chas Chandler: “I need help bad, man.”

Have you ever noticed how your low ‘E’ string just never stays in tune? Wondering why it’s harder to play your guitar rather than your buddies’ slick Gibson? The secret to effortlessly traveling along the […]