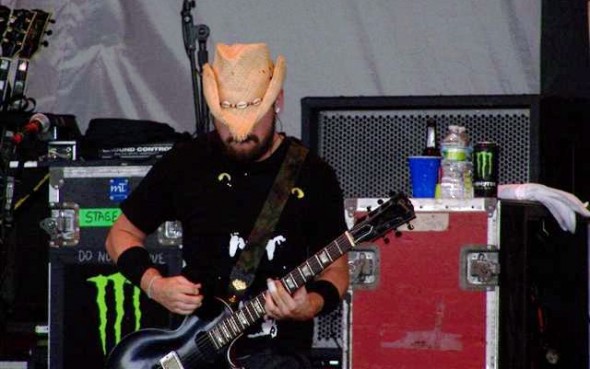 Ryan Johnson (aka Tater) is one of the founding members of the alternative metal band, 10 Years. Tater wanted to play guitar at the early age of 13 years old, but coming from strict Southern Baptist roots, his mother didn’t want him to play music, especially rock ‘n roll. After Tater went to his first show (Rancid and Offspring), he knew that’s what he wanted to do.

Tater never took any guitar lessons, instead he would just try to surround himself with the most talented musicians he could to help him learn. Tater’s guitar influences were more on the side of punk and alternative music such as Nirvana and Alice In Chains. Tater is also in another band called American Plague. See pictures of Tater’s gear taken from the Carnival Of Madness Tour at the DTE Music Theatre in Clarkston Michigan.

Schecter Guitar Research have officially joined forces with Disturbed guitarist, Dan Donegan. Dan first debuted his signature guitar at the 2009 winter NAMM show. While I’m not a huge fan of Schecter, I was excited […]

Just days after the passing of iconic vocalist Ronnie James Dio, the world’s heavy metal community is mourning another life lost seemingly out of nowhere. Paul Dedrick Gray, the bassist for the popular masked metal […]