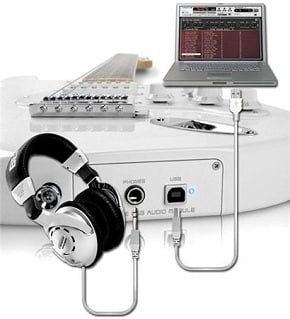 In the early 1990s, when digital recording bypassed analog sound-boards as the primary method used in studio sessions, the electric guitar – with its magnetic pickups – was forced to reconcile with the personal computer.

This presented something of a challenge, since that classic rock sound is something that throbs through a stack of speakers powered by a tube-driven head – the antithesis of lasers and binary code. Microphones, no matter how expensive or exotic, have not had the easiest time accurately translating the legendary language of rock into something that is digested as data. It’s something that bothers musicians and engineers alike.

The process almost seems to have been mastered, if you’ll pardon the pun, by now. Even so, veterans of the recording industry can often be heard complaining about things like “warmth”, speaking fondly of the good old days when sound was fat, not phat. And around those old pilings the river of music flows, with musicians finding the best ways to not just play, but to format, their art. After a generation’s worth of exposure to Pro Tools and whatnot, guitar players and guitar makers are still adapting to the digital workplace.

Converters, in which one can plug a quarter-inch instrument cable, are able to communicate directly with music software through the USB port, bypassing the old standbys in favor of cyber-amplifiers. While it seems cold and disconnected, this removes numerous square feet (and hundreds of pounds) of gear from the recording environment, with little need for amps, pedals and the miles of cable linking them all together anymore. You want to plug in and get loud? Go home to your garage.

Keyboards and MIDI controllers can also be fed into the computer, but those are inherently digital instruments which lend themselves to such things anyhow. With guitars, it’s a different story. Behringer, a company best known for its “special effects” amplifiers (like the V-Tone), has introduced a USB guitar that requires no converter – it plugs into the computer just as an MP3 player would.

Consumers have vacillated over their satisfaction with the Behringer iAxe393 (and a similar one made by Ion). It features a Strat-style setup, with three single-coil pickups, a five-way channel selector and a tremolo. It can be plugged directly into the computer or plugged into an amp through the standard 1/4″ output jack. The 22-fret neck is maple, as is the fretboard. It comes with accompanying recording software. All of this can be had for a couple-hundred bucks. Who wouldn’t want one?

The general consensus is that the iAxe393 is a beautiful instrument, but that its build quality is wanting. Tuning and intonation, in particular, come up as an issue… Complaints that “gear snobs” always raise about guitars that don’t have one-piece, neck-through bodies. They would seem to be less than mindful of where we are in this dawning age, where digital and analog are still finding each other like particles in an atom smasher. Taken for what they are, USB-enabled electric guitars should find plenty of room in the realm of recording, and should attract more attention as time goes by.

A macabre black paint job, a creature-inspired body shape and a sinister name don’t automatically qualify a guitar for employment as a metalworker. But if that same shady plank plays with the speed of the […]

The idea behind preamp multi effect processors is a noble one; offer the consumer a reasonably priced, all in one package that covers all the bases for just about any situation a player might find […]