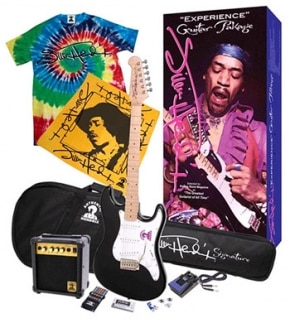 As many of you already know, Gear-Vault was first on scene to report the original notion: “Gibson to create Strats for Jimi Hendrix’s new Signature Model?”

Less than a week later Gibson finally confirmed what we had already suggested–on September 24th Gibson officially announced the Hendrix Strat and posted detailed images from the factory.

The rave was less than favorable for Gibson and obviously, it didn’t turn out as Gibson had initially planned. Who knows, maybe Gibson was expecting millions of people to show up at the land-of-Woodstock to dance naked in the warm rain while singing kumbaya–Didn’t happen! Instead, people were downright pissed off about the Strat ripoff with Jimi Hendrix’s mark on it–Gibson has been under scrutiny for the past 10-days.

My grandmother once said, “if you can’t stand the heat, get out of the kitchen“–apparently Gibson felt more than heat–they were getting burned from the massive flames being thrown at them. Three days later, on September 27th, Gibson removed all the content from their official website about the new Gibson Hendrix Stratocaster. After feeling the flames for days Gibson is now laying low. Smart move guys!

Now who’s pissed? Authentic Hendrix LLC are probably outraged over this–clearly they wanted to cash in, with Gibson, to mass produce these Gibson Hendrix Packages that range from $229 to $449. Some ‘special collector’, right? Hey, maybe Gibson’s next brilliant PR stunt will be a Sponge Bob Rhoads Hollowbody. Can’t wait!

Gibson Les Paul 2010 Standard Limited Review — Gibson is equally known for their traditional guitars which are inextricably linked to song history and for spearheading the way in the high-tech guitar world, as seen […]

Jimi Hendrix – The Greatest Guitarist of all Time?

Jimi Hendrix was given the top spot — According to the readers of Time Magazine, Jimi Hendrix was voted the greatest electric guitar player of all time, and honestly, I can’t say that I disagree. […]