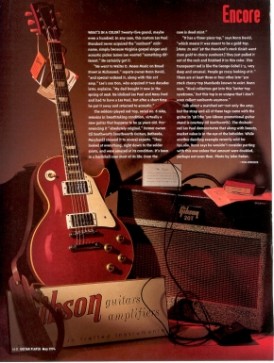 Here’s a really cool vintage Gibson Les Paul article from GuitarPlayer that was published in 1994. Attached is the photo of the guitar and amp from the article.

What’s in a color? Twenty-five grand, maybe even a hundred. In any case, this custom Les Paul Standard never acquired the “sunburst” nick-name simply because Virginia gospel singer and acoustic picker James Lee wanted “something different.” He certainly got it.

“He went to Walter D. Moses Music on Broad Street in Richmond,” reports owner Ronn David, “and special-ordered it, along with this 20T amp.” Lee’s son don, who acquired it two decades later, explains, “My dad bought it new in the spring of 1958. He idolized Les Paul, but after a short time he out it away and returned to acoustic.”

The seldom-played red-top, serial no. 8 1689, remains in breathtaking condition, virtually a new guitar that happens to be 35 years old (51 years old as of now). Pronouncing it “absolutely original,” former owner Gil Southworth (Southworth Guitars, Bethesda, Maryland) showed it to several experts. “They looked at everything, right down to the solder joints, and were amazed at its condition. It’s been in a hardshell case most of its life. Even the case is dead mint.”

“It has a three-piece top,” says Ronn David, “which means it was meant to be a gold-top. [Note: in mid ’58 the Standard’s stock finish went from gold to cherry sunburst.] They just pulled it out of the rack and finished it in this color. This transparent red is like the George Goble L-5, very deep and unusual. People go crazy looking at it.” There are at least three or four other late-’50s stock cherry-top Standards known to exist. Ronn says, “Rival collectors get into this ‘better-top syndrome,’ but this top is so unique that I don’t even collect sunbursts anymore.”

Talk about a matched set–not only the amp, but the strap and all of these tags came with the guitar in ’58 (the ’50s Gibson promotional guitar stands in courtesy Gil Southworth). The rhubarb-red Les Paul demonstrates that along with beauty, market value is in the eye of the beholder. While another dazzling example recently sold for $50,000, Ronn says he wouldn’t consider parting with this one unless that amount were doubled, perhaps not even then. Photo by John Peden. -Article by Tom Wheeler – GuitarPlayer 1994

Danelectro guitars are highly sought after collectible items by discerning guitarists and are of extra-ordinary quality and style. The history of Danelectro begins in 1947 when it was founded Nathan Daniel primarily as an amplifier […]

Why is it that your first electric guitar often tends to be your most forgettable? The only thing I remember about my first guitar was that it had strings like a cheese cutter and came […]