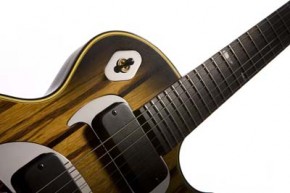 Gibson Guitars are still paving the way in terms of guitar technology. Enter the Dusk Tiger, [Gibson claims] simply the most astounding innovation in the history of the guitar. In the wake of Gibson’s groundbreaking Dark Fire, the new Dusk Tiger guitar offers an unprecedented wealth of features to expand your sonic horizons exponentially, yet it brings them to you with greatly increased levels of performance and ease of use, and all at a more affordable price.

And not only does Dusk Tiger offer an awe-inspiring versatility of tone and playability, it also captures a stunning new look that is arguably more refined than anything Gibson Guitars has ever produced. It retains the general Les Paul-inspired body lines, but presents them in a guitar with a flat top made from an exotic hardwood beaming with golden, amber, and dark chocolate hues. [Read more below ad]

All this top is coupled with a tone-chambered back, and a unique new pickguard and control layout. Under the hood, the Gibson Dusk Tiger reveals countless new features that give it even more power, along with considerable upgrades and improvements of existing electronics and control systems, and an unlimited number of sound possibilities. Take a sneak peak at the Gibson Dusk Tiger at Gear-Monkey message forum.

New to the Dusk Tiger are:

Source: gibson.com. More details and news on availability worldwide to be released by the guitar leader on Monday, November 16, 2009 – We’ll update more information as we receive it.

Around the same time that George Beauchamp and the other early electric guitar pioneers were active in southern California, a guitarist and radio personality named Les Paul was in Hollywood working out his own vision […]

The Gibson Midtown Standard with Bigsby starts with a solid mahogany body that is strategically chambered for optimum resonance. A solid maple top with f-holes is glued to this foundation, finished in your choice of high-gloss Faded Red or Ebony Black. A solid mahogany neck is carved to a fast, comfortable ’60s-style profile that measures .800″ at the 1st fret and .875″ at the 12th, and capped with a bound Grade-A rosewood fingerboard with 22 medium-jumbo frets. Tidy white binding accentuates the body and fingerboard, while eye-catching mirror dot inlays adorn the fingerboard, and the headstock wears a simple yet elegant mother-of-pearl Gibson logo. […]

The BFG line of Les Pauls has been well-received by the public. The “photo-finish” archtops, which remove so much of the woodworking from the process, allows Gibson to sell the Les Paul at prices comparable to what people have always been willing to pay for standard American Fenders. A Les Paul Custom, costing three times as much […]