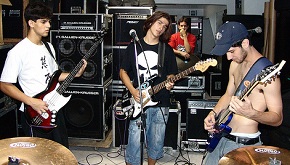 Music should be loud. That’s just a simple fact. Sure, it applies more to rock than, say, Mozart, but you need to be able to feel the music. Preferably in your fillings, as they shake loose from your teeth. But I don’t need to tell you this, because as a guitar player you know this instinctively.

The problem, of course, is that your bandmates may not. They may be laboring under the mistaken impression that quality of music is more important than the quantity of sound, a position which is, of course, completely insane. They will probably also whine about not being able to hear their own playing, a problem which they could easily remedy if they would crank their amps up to eleven.

What this inevitably leads to are Volume Wars. You know that music needs to be loud, but they keep trying to turn the dial down. The usual excuse is that they need to be able to hear all the music, or that their neighbors are hiding in bathtubs because they think they’re having an earthquake. This just means you’re doing it right.

But no worries, you can win the volume war. You just need to do a few things first.

The ringing in your ears is also a pretty good barometer of how well you’re doing in the volume department. If they never stop ringing from one practice to the next, chances are that you’re getting the hang of it.

Now you might find that once you’ve reached the upper limits of what your rig can do that you can no longer actually hear your music. This is fine, and you should expect this to happen. At this point, you should be focusing on feeling the music. Properly loud music will cause your skeleton to rattle.

There are a couple of approaches that your bandmates might take once they’ve decided you’re too loud. The usual tack is to try talking to you or, more likely, yelling at you. Fortunately, if you’ve got your music up loud enough, you’ll never hear them, so that’s a problem that takes care of itself.

But they might also take the direct approach of actually turning your music down. At this point, you have a couple of options. One is that you can give them a savage beating with your guitar, but that has the drawback of potentially damaging your guitar, especially if you use it on the drummer.

Instead, what you want to do is turn all knobs and other volume controls to their maximum and super glue them in place. You may also find it necessary to weld your cords and plugs together, to prevent them from yanking them out.

Ultimately, the key to winning the volume wars is the offense. What you need to do is surreptitiously turn their volume up. A little bit at a time, and they will start thinking that you’re being quieter. This will keep them off your back while allowing you to play music the way it’s meant to be played: LOUD.

On September 16, 1977, just after five in the morning, an Austin Mini carrying English rocker Mark Bolan and driven by Bolan’s girlfriend, Gloria Jones, swerved off a road in Barnes Common, England, and crashed […]