Drummers, by nature, seem to be able to tinker with things. It may very well be a result of having to fix our gear in the middle of a gig, that we develop a certain “know-how” for drum and hardware construction, often after multiple applications of duct-tape.

Throughout the history of the drum industry, there have been many companies started by those seeking to “build a better mousetrap”, a more dependable product, a sound we hadn’t heard before.

The Famous Drum Company of Copley Ohio may very well be the next to catch that mouse. Founded in 2008 the company caught the drumming world’s attention with a drum straight out of your local lumber yard, the aptly named 2×4 Snare. 2×4 (or as we’d say back home in Michigan…”tuba-for”) is not a reference to this drum’s depth and diameter, but rather what it’s made of. This block-rocker is build using readily available 2’’ x 4’’ Spruce framing studs – the same you’d get at the lumber yard – chrome hoops and lugs and an industrial-switch-looking throw-off that works great and really adds to the visual vibe of this drum. The end result is a segment-shell snare drum with a tone that just…well…barks! I’ve never heard a drum like this before. Spruce has long been a tonewood of choice for piano and acoustic-guitar makers and it makes sense that it would deliver such a sweet sound in drum form as well. Tuned low and tubby or tight like a tennis racket, this drum won’t choke. Take into account that this stuff is strong enough to build a house out of and you’ve got one convincing argument hammering on a 2×4 Snare. 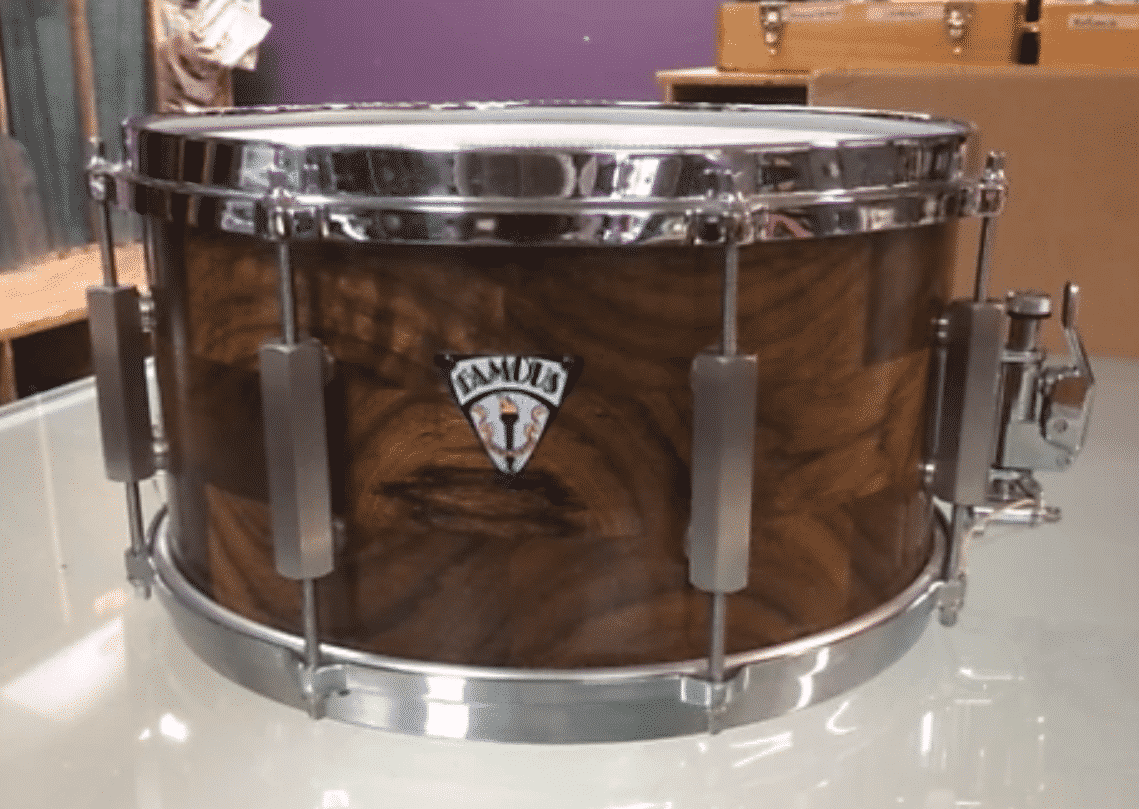 Famous Drums have also been tinkering with a drum it simply calls the Indestructo Snare. This 7” x 13” chopper is not for the faint of forearm! Built around a 1” thick segmented Shedua wood shell, the Indestructo comes outfitted with die-cast hoops, a Dunnett R-Class throw-off and some seriously beefy hex-shaped lugs made form solid, milled bar-stock! – did you just make a caveman grunt? This little monster has some serious sonic bite and was specifically designed for ultra high tension fire-cracker tuning. That said, the Indestructo snare also does well low and slow with fat, focused backbeats and un-choked ghostnotes! Damn, I mean DAMN!

It’s not often that something so truly different comes along that is also so truly use-able. Famous Drums Co. has indeed been tinkering on building a better mousetrap. With their creative use of common materials and simple, artful aesthetics, they have come out of the garage with two great new snares. Neither of which having anything to do with cheese.

For more info on all of Famous Drums products visit: www.famousdrums.com

I keep an old ashtray on the counter by the back door to put my keys in, so I don’t forget them when I leave the house. They’re always there when I look for them […]

This is neither the first time you’ve read me touting the fine wares that are Protection Racket’s products, nor do I suspect it will be the last. For something as simple as a soft-case you […]