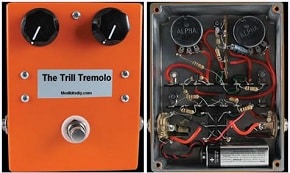 I’ve played on a lot of pedals. Wahs, tremolos, distortions, phasers, you name it. I’ve only built a few. So when I got the chance to review a diy pedal, I jumped at the chance. Building an effect pedal is more than a simple task at hand; it’s more like an experience. It’s a journey through a myriad of parts, numerous references to the build sheet, and a whole lot of patience.

SPOILER ALERT: It’s a bitch to put together. I’ve built a few pedals over time, and I can say I have never had as much trouble with a unit as I did with this one.

For starters, the parts list was incorrectly labeled. Here’s a scanned picture of the list they sent me: 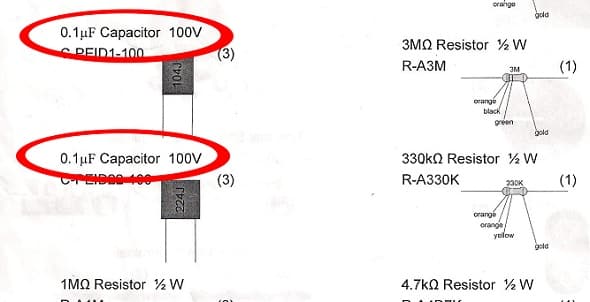 Update: Mod Kits DIY have corrected the issue in the instructions.

Notice that underneath “0.1µF Capacitor 100V”, the next part on the list is the same thing.

I just thought they were all the same capacitor, and that maybe they just looked different.

The second entry should have been “.22µF Capacitor.”

After a trip to Radioshack to pick up some desoldering braid, I removed the joints of the capacitors, and put the new proper ones where they needed to go. Throw in a whole lot of wiring and a mess of resistors, boom. We have a pedal.

When I turned it on, I could have sworn someone was knocking at my door. I kept hearing a thumping sound. Turns out, it was the Trill Tremolo. When I turned down, it wasn’t as noticeable, but hey, I like to play loud. At loud volumes, it was unbearable.

The “depth” knob was incredibly scratchy as well, and did practically nothing until the 7 or 8 position. When I turned it all the way to 10, it cut my volume down by at least 50 percent.

The speed knob was similar; it really only did something at the 4 or 5 position.

I can really only give credit to the Trill Tremolo in low volume studio situations. When recording at low volumes, and without any dynamics in the effect at all, it gets the job done. But it is useless as far as live situations go. Imagine, getting up in front of your crowd that pays money to see you play, and having this incredibly annoying thump coming right at them.

So after all the time and effort and work to get this thing together, I have a box that sort of works. Which means had I bought it, I would have paid 44 dollars for a so-so pedal.

And when I went to the website to get some tech support, all I found was an info@modkitsdiy.com e-mail. No tech form, no live chat.

Bottom line, buy your equipment from a reputable dealer or a trusted music store. You will pay more, but won’t have to mess with putting together, and you can have confidence that it will work in every situation. And in case it doesn’t you’ll have a warranty to back it up later.

And in case the DIY market is calling your name, at the very least, do the research. Read the reviews, talk to your friends, the whole nine. Because not all DIY companies are the same. In fact, they are more diverse than the big boys gracing the shelves of Guitar Center. Head on over to modkitsdiy.com for more info.

I’m 15 years old and have been playing guitar for about three years. Recently, I’ve become obsessed with the vas array of effects on the market. I currently own a DOD flanger and a Vox […]

Electro-Harmonix has a history of pedals with super-hero-sounding names: Electric Mistress, Memory Man, Worm, and P0G. A new trio is no exception: Neo Clone could come out of the Matrix; Iron Lung might be Iron […]