Compared to some sexy new guitar or an amp powerful enough to frighten small children, many would consider a pedal power supply a yawner. But those of us who have spent years in the trenches designing power supplies know differently: They’re the source, the fountain head, for all of you do–and all power supplies are not created equal.

It’s a no-brainer that batteries are not the best choice for multiple pedals, and several companies have stepped into the AC adapter void. Voodoo Lab has been at this a long time; their ISO-5 reflects that experience by adding some features that help create more of an industrial-strength vibe.

The ISO-5 has five isolated voltage output sections: three 9V at up to 100mA each, a high-current output with 9V and 12V taps (this can drive pedals like the TC Nova line, Line 6 modeling pedals, and eventide stompboxes), and an 18V output. The two high-current outs aren’t isolated from each other, so it’s best to use either 9V or 12V, but you can use them both if you stay within the rated current.

The number of outputs might disappoint some, as there are competing units with more out. However, these often tie multiple outputs to the same “feed”, so the effects aren’t isolated from each other, and you still have to be careful about the total power supply consumption-more outputs don’t necessarily mean more current, it’s distributed over more devices. Besides, if you’re willing to forego isolation you can always use a single ISO-5 out to drive multiple devices Via a daisy-chain cable. The high-current out is particularly suitable for this, but you can often drive several lower-power pedals from one of the ISO-5’s 100mA outputs. 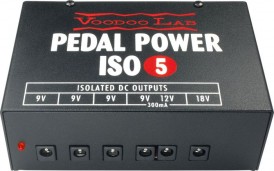 Isolated outputs matter for three main reasons. First, both the positive and negative leads are “floating”-neither one connects to the ground. So, an output can work with negative ground effects (most pedals) or positive ground pedals like the Fuzz Face and Octavia. Furthermore, with effects that use a bipolar supply, one output can replace the positive supply, while another output replaces the negative supply battery. (effects that use two batteries simply to provide 18V are accommodated by the 18V output, but again because of the isolation, you can ”y” two 9V outs together with a special cable for another 18V output.)

The second is the audio quality. The power supply ties into every part of a circuit and dirt or noise on supply lines (which digital effects often generate) can get into the effect. Remember several years ago when Eric Johnson claimed he could hear the difference between using alkaline and carbon-zinc batteries in some effects, and everyone thought he was nuts? Well, the two battery types have very different internal impedances, so they absolutely could affect the audio in devices with poor power supply rejection. Isolating each output not only provides a clean, stable source of power for each effect but also prevents interaction among effects fed by a common supply. Finally, isolated out make it very difficult to create ground loops with your pedals, which again helps audio quality

The build quality is noteworthy. The ISO-5 uses a detachable IEC power cord, not a wall wart. I took the unit apart to check out the internal components (my general rule is “if the warranty hasn’t been voided, then the unit hasn’t really been tested”) and verified Voodoo lab’s claim of isolation: Each output has it own diode bridge, regulator, and filtering capacitors. Also, this is a linear, analog power supply using an efficient toroidal transformer, not a digital switching type, which means you won’t get “dirt” from the switching action injected into your pickups (or into effects with questionable power supply rejection). And here’s a spec only a geek would love: The copper traces use thicker 2-oz. copper, not the usual 1oz., for minimal resistance (this lowers noise and increases current-handling capacity). Not though, that the power supply is not global- there are three different models to accommodate countries with 120V, 100V, and 230V.

The ISO-5 comes with a “greatest hit” collection of cables for feeding effects, but if you have more esoteric needs (e.g., a cable that reverses the supply polarity), Voodoo lab offers optional-at –extra-cost cables.

Of course, I had to short out the outputs to see what would happen, and nothing happened — a good thing. I also appreciate that there’s the five-year warranty (the ISO-5 is engineered and made in the USA); given the build quality, I doubt that too many people will need to take advantage of that.

Granted, power supplies aren’t sexy. But this one is well-engineered, well constructed, and built to take the rigors of the road which is a whole lot more important than sex appeal when you’re counting on your pedals to take you through the gig.

On January 12, 2011, the Jackson Browne Signature Gibson acoustic guitar was unveiled at the National Association of Music Merchants (NAMM) winter show in Anaheim, California. Hearkening back to Gibson’s revered Roy Smeck models of […]