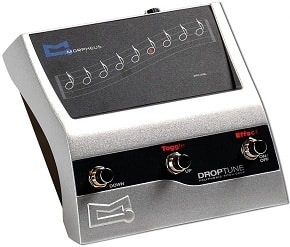 Have you ever sat down with a pitch shift pedal only to be disappointed when your E major chord turned into garbled nonsense?

Traditional pitch shift pedals can only process one string at a time, but with the Morpheus DropTune, real polyphonic drop tuning exists in a squash of a pedal.

The Morpheus DropTune takes technology developed by an avid team of professional guitar effect aficionados, and puts it into one extremely cool idea of a pedal. Allowing you to tune down three and a half steps in half step increments, this lets you do away with the extra guitars. This can really be a relief to those on tour that are hauling up to three or more instruments at a time. Multiple instruments can start to take up a lot of space in a tiny van, and can become an expensive upkeep considering strings alone.

see this pedal in action – performed by guitarworld

Morpheus allows you to drop tune your guitar so the chord is changed to Eb, D, Db, C, B, Bb or A

The pedal has an octaver, which will let you switch to the octave down or up of the note you’re playing. This can give your solo that added pop and let you really take off into the higher registries, just like your old Octavia does. (Note that this is NOT a replacement for an Octavia.)

A pedal like this is ideal for someone lugging many guitars, or someone that just wants to play in various tunings. Most guitarists won’t ever experience what the sound of a guitar tuned to C major sounds like (boy does it sound cool!), and what a shame that is. The Morpheus DropTune will take all the work out of it and open some new doors to these cats.

The DropTune claims to keep a very realistic sound true to what a dropped guitar sounds like. Skepticism is near impossible. Most pitch shifting pedals I’ve ever used have always left me with a bad taste in my mouth due to the artificial noise that seems inevitable from the very first chord. Even if the DropTune maintains a realistic sound, it may not be as realistic of a feel. If you’ve played a guitar tuned low, you know how the strings feel on your fingers. The ability to bend notes into outer space is something otherworldly that you can’t do in standard, even with the flattest fingerboard radius.

The Morpheus DropTune looks like it might be worth the investment at a modest $199.99. It’s an extremely rugged cast metal box made to last, and has a sleek design to boot. The pedal is laden with nine musical notes indicating what you’ve dropped to, and looks especially sleek. If you have the opportunity, give it a try. The tremendous amount of work and time it takes to tune a guitar down and back again is worth it sometimes. Though, for those who can’t be spoiled with multiple axes, this may be the ideal pedal for you. Go to their website to see more shit – www.morpheusguitarpedals.com

Forgive me for abusing the following line from rock history. ‘You wanted the beast…you got the beast!’   That is probably the most accurate way to begin describing the Line 6 M13 Stompbox Modeler, a […]