Legendary guitar maker, Fender Guitars, helped pave the way for electric guitars of today, but the question of today, “is Fender’s body-shape generic?”. Obviously TTAB (Trademark Trial and Appeal Board) believe so. Fender lost its case to make its Stratocaster, Telecaster and Precision guitar body shapes a trademark in the USA.

The Trademark Trial and Appeal Board (TTAB) of the United States Patent and Trademark Office (USPTO) argued:

“Fender refers to the ‘iconic’ status of these [instrument] outlines in American popular culture. However, we must resolve a narrow issue: Do consumers associate these two-dimensional outlines, depicted in the drawings, as indicators of source?”

Five years
After five years with the legal process, the litigation added over 20,000 pages of evidence demonstrating numerous guitar companies that manufacture and sell guitars which use the body design that Fender sought to trademark.

“The applicant has not established acquired distinctiveness such that these two-dimensional outlines of guitar bodies, standing alone, serve to indicate source,” the TTAB concluded. “The evidence overwhelmingly demonstrates that these configurations are so common in the industry that they cannot identify source.

“In fact, in the case of the [Stratocaster] body outline, this configuration is so common that it is depicted as a generic electric guitar in a dictionary.”

Below are two images. Pick out what guitar is a Fender Stratocaster and which is a copy of the Fender Strat. (Read: How To Spot a Fake Fender Guitar) 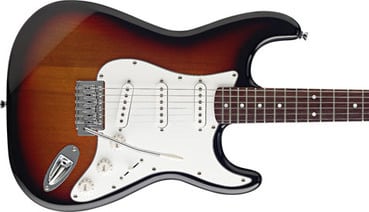 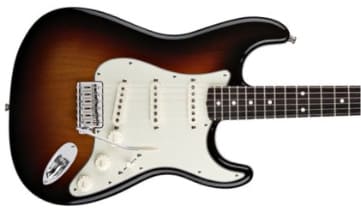 Use Your Illusion – MJ Mirage GT

THE MIRAGE GUITAR WAS nurtured to fruition among the wine-growing valleys of California by MJ Guitar founder and owner Mark Johnson, whose exciting blend of vintage and space-age varieties was a formulated during the 22 […]

Depending on how you look at it, Hamer guitars has built their reputation as either the guitar world’s custom shop or its smallest production line. Whichever view you choose, the bottom line remains that Hamer […]