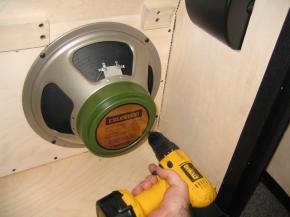 In September we wrote an article about the particulars of speaker enclosures and how they affect the sound of a cabinet (read here).This month, we’d like to focus on the intricacies of the speakers themselves and their components.

A good speaker can be the difference between and awesome tone and a lousy one. But it’s not always that simple; a speaker that sounds good in combination with a certain amp and guitar will not necessarily sound great with every amp and guitar. There are several factors that need to be considered when attempting to achieve the perfect balance between a guitar, an amp and a speaker.

For one thing, there’s the relationship between the wattage and the efficiency of a speaker and the amplifier that’s feeding it power. If you’re going for a very clean sound, you want your speaker to be able to handle all the power that your amp can give it and then some. If your amp is more powerful than your speaker’s power-handling capability, the speaker will be pushed to its limit, adding distortion to your sound. A good way to demonstrate this would be to take a 100-watt amp and plug it into a 100-watt cabinet and then into a 200-watt cabinet. The 100-watt cab will sound more distorted than the 200-watt cab because the speakers in the 100-watt will be pushed closer to their maximum capability, resulting in distortion. That’s why many players favor lower-wattage speakers driven to distortion by powerful amps.

The magnet contributes heavily to a speaker’s overall tone. The most common types of magnets found in guitar speakers are ceramic and alnico. The very popular Celestion 25-watt “greenback” has a ceramic magnet and, although it has less of a focused field of energy, it has its own character and a very cool sound. On the other hand, the highly acclaimed blue-colored Vox bulldog speakers, as well as some JBL and Electro-Voice (EV) speakers, use alnico magnets. Alnico magnets also have their own sound and character which, to my ears, is a little more focused.

Guitar speaker cones are made out of paper. When people refer to ‘vintage style cones,’ they’re talking about very simple, low-tech, flat paper cones. As guitar sounds evolved over the 40 years, some speaker manufacturers incorporated more intricate cone designs by introducing ripples and ridges with the goal being better rigidity and stability at higher power to stave off distortion.

The housing in which all of these components are mounted is called the frame or the basket. The majority of frames are made by stamping flat sheet of steel and bending it into its final shape. Steel is used because it’s relatively inexpensive and very strong, which is important so that its shape doesn’t change. Some high-end speakers use what’s known as a cast frame or speaker basket. Cast frames are made by pouring molten aluminum or a similar allow into a cast. When the alloy cools off and hardens, it’s almost impossible to distort or alter the shape of the frame, which makes it an optimal mounting for the components of a speaker.

No discussion of speakers could be complete without including some mention of impedances. What I’ve come to learn over the years is that the impedance of a speaker is an arbitrary decision made by the manufacture. Leo Fender, for example, was really only making amplifiers with one or two speakers and decided that, with one speaker connected, it would be eight ohms, and with two in parallel, it would be four ohms—while taking into consideration that eight ohm efficiency is an audio amplifier is most efficient for direct music input. In contrast, the British giants like Vox and Marshall pursued greater versatility in combinations of speaker hookups and settled at 16 ohms to facilitate their needs. Just make sure the impedance on your amp matches your cabinet(s).

That’s all for now, see you next time. Come join us at Gear-Monkey Music Gear Message Boards

Traditionally, guitarists have kept separate rigs for live gigging, studio tracking, and practicing at home. While some players still cling to this approach, the lines between the different types of amps from back in the day have blurred with the advent of the modern modeling amp. […]

First, let me reassure you, gentle reader, that there will be no discussion of Swedish pop groups in this space. What we are talking about here are amplifier classes, which are defined by how an amp operates and produces its tone. There are many different types of amp classes, but in this article, we will touch on the two most common in the guitar world […]

keep in mind that a solid-state amp and a tube amp of the same wattage will sound different due to the nature of their circuitry. To my ears, tube amps always sound louder and more powerful, but that doesn’t man solid-state amps aren’t cool. It’s just a matter of personal preference […]