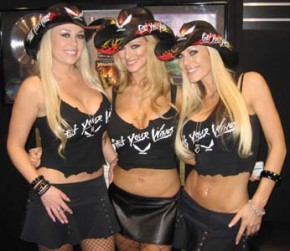 Our compadres over at Guitarist magazine have compiled a ‘fantasy’ top 10 of NAMM 2009 releases: the guitar gear (and hot guitar girls) we can drool over.

Not only will the latest incarnation of Gibson’s More Intelligent Than You® technology push the envelope still further, the guitar will obey the three laws of robotics, the final one being that it’ll only allow you to play jazz when another human is in danger.

Back in 1955, when the Stratocaster was still wet behind the ears, Leo Fender gave his aunt one of the working prototypes. Recently rediscovered in a dusty old attic, it boasted two single-coils, not the regulation three, and was finished in giga-rare Trans Ocean Beach House Creamburst. It will be reissued by the Custom Shop in very limited numbers, each hand-painted by a Mexican child. The cost? A ruddy fortune, obviously.

The Petaluma amp masters proudly announce the heaviest amp in the world. It weighs in at just over 500 lbs and comprises a Road King guitar amp and Big Block bass amp, all in one package. It comes in it’s own flight case along with four road crew, as you ain’t gonna be able to lift it.

The latest incarnation of Line 6’s all-conquering amp line does something slightly different than its previous outings. We believe it has something to do with how it works with a computer, but we don’t really know… And anyway, do you really want to sound like John 5?

A limited edition of a triple neck that boasts, five colours, 137 different flecks of highly endangered woods and inlays comprising the fossilised bones from 19 extinct animals. PRS have yet to begin work on actually building any of them, but all have already been pre-sold to lawyers, heads of state and Manchester United footballers. The ‘5708’ suffix relates to the fact that an Ivoroid, rather than graphite nut, has been employed.

In a giant step, legendary web-based store Analog Man brings out a pedal that allows guitarists possessing actual talent and tone to revisit their formative years. This stompbox provides a dull and lifeless sound that takes you right back to the days when learning B7 meant you could have the rest of the night off.

Worried that your recordings are becoming too good, too hi-fi? Tascam have thought of this, and have incorporated their revolutionary SOC© technology into a small desktop unit that enables you to make it seem like everything you commit to virtual tape sounds as if it’s been recorded through a sock. Genius.

Dean issue yet another tribute to the tragic legend. Has been dubbed ‘Breakfast Time’ as that’s when the idea occurred to Dean’s marketing department. It’s what he would have wanted etc.

“I did use a slide a lot back then,” says Ed in the official paperwork. “Well, before we formed Van Halen.” The ceramic bottle has been painted up with Ed’s traditional (and copyright-owned) stripy livery and would go perfectly with the equally redundant EVH wah.

Because he’s hardly worth it. Well, he has endorsements with everyone else…

Gear-Vault will be reporting all the cool stuff at NAMM 2009. So be sure to Subscribe to Gear-Vault eNews!

Paul Reed Smith Guitars have unveiled an exciting addition to its popular SE range for 2010, sporting an array of features never before seen on a production PRS model. Something metalheads will certainly drool over. […]

6 ESP Guitar Models That Will Make You Drool – 13 Guitars In Total!

Are you a rock guitarists, or metal purist? If so, then this list is for you! We’ve compiled 13 kick ass ESP Guitars models (released fall of 2009). To break this list down for you, […]

The HP Single Cut Series includes three models with humbucking pickups, ceramic loaded for warmth, punch and presence, and harmonically positioned and frequency calibrated for each guitar. The HP SC-1 and HP SC-2 are elegant two-pickup guitars, while the HP SC-3 is a three-pickup monster with an array of possible tones. […]